It’s December 2014, and the U.S Census Bureau has just reported that for the first time on record, monthly restaurant sales have exceeded monthly grocery store sales. Fast forward to April of 2015, and restaurant sales are continuing to exceed those of grocery stores.In fact, from July of 2014 to April of 2015, a $3.1 billion dollar shift in sales from grocery stores to restaurants occurred, which is almost as much as the last 4.5 years combined.
The billion-dollar question many people are asking, is what, or who, is to blame (or thank) for the dramatic shift in sales? Here are a few specific factors as to why people are getting the check, and ditching the cart:

Believe it or not, less pain at the pump has resulted in a willingness to spend that money elsewhere – particularly on dining out. In fact, almost half of people surveyed attribute their willingness to purchase meals, snacks, or beverages from restaurants, fast food places, and coffee shops to lower gas prices, according to the National Restaurant Association.

As the economy continues to show signs of post-recession growth, people are feeling more comfortable opening their wallets and swiping their credit cards, especially when it comes to eating out. In fact, one-third of people say they are patronizing restaurants more often now than they were one year ago.

With unemployment rates falling and campaigns for a higher minimum wage plaguing major U.S cities, people are earning more money, and investing it in the restaurant industry. In fact, Americans ages 15 to 24 saw their household income rise 10.5 percent in 2013, the age group that also happens to spend the most money on dining out. 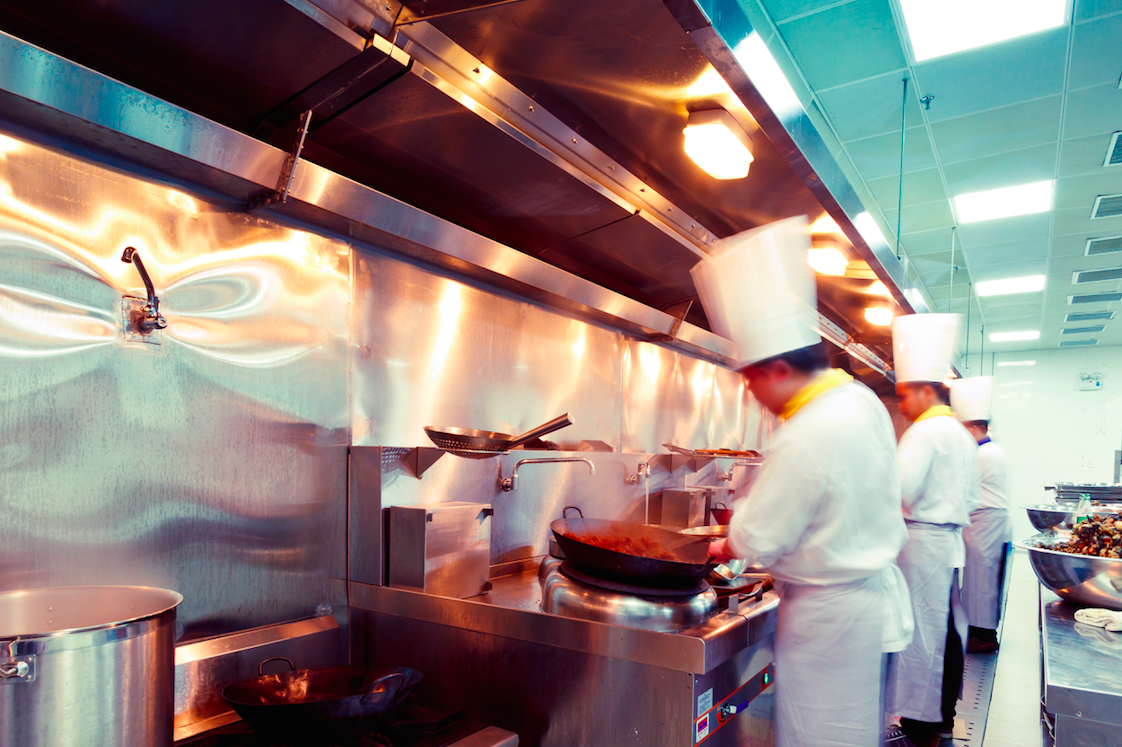 First reported in an article by Bloomberg, there is one stipulation to consider when comparing the sales of restaurants and grocery stores; the data doesn’t include the sales of big-box stores like Wal-Mart Stores Inc., Target Corporation, and Costco Wholesale Corporation.

Although these stores have been excluded from the study, the data serves as an example of the evolution that has occurred in American eating habits, and how the grocery industry is going to have to adjust to accommodate the change in lifestyle across different generations.

This week, the National Federation of Independent Business (NFIB) released its latest Small Business Optimism Index, showing an increase of 1.4 points in May for a total of 96.6 points—the highest index reading since 2007.

A few key factors contributed to business owners’ improved outlook  in May:

Key Takeaway: The lingering effects of tough economic times haven’t been eradicated by any means, but the Optimism Index indicates that the tide may be finally turning for small businesses. As consumer confidence continues to rebound, let’s hope that local establishments reap the benefit!

This week, Twitter released a new study on SMB Twitter usage and perceptions. The social media company surveyed 1100 small and medium business owners in the U.S.

The major findings of the study were generally favorable toward Twitter as a platform for market seeding and customer support:

Key Takeaway: Twitter is becoming a more important marketing tool for small businesses as owners begin to see the benefits of investing in the platform. But there’s still a lot of room for improvement. Only 58% of survey participants currently use Twitter for business, although more than 70% feel that the social network is an important channel. If you haven’t yet gotten in the social game for your small business, now is the time! Local consumers are looking for you there—don’t miss out on the opportunity to start a conversation with prospects and engage your current customers.

Spotsetter’s technology works to layer friends’ recommendations, reviews, and other social information on top of a standard map interface to make local search a more social experience. The algorithm pulls in content from Facebook, Twitter, Instagram, and Foursquare, as well as review sites like Yelp, TripAdvisor, Zagat, and Michelin.

Key Takeaway: Given the epic failure that Apple Maps has been to date, Apple’s acquisition of Spotsetter makes sense. If Apple can augment its proprietary maps technology with additional data that competitors like Google and MapQuest aren’t providing, they may be able to woo back iOS users who gave up on their Maps app early on.

The latest Wells Fargo / Gallup Small Business Index, which calibrates the overall outlook for small businesses in the US, has hit its highest level since 2008, indicating a renewed sense of optimism from small business owners.

The poll revealed an uptick in small businesses reporting a strong cash flow for Q1 and higher revenue projections for the next quarter after a consistent string of quarters with declining economic performance and stability.

Key Takeaway: Although the overall economy is still facing a variety of issues, the small business sector appears to be in a more stable economic state than it has in months past—a great reason to be optimistic about the future.

This week, Facebook announced that it earned 53% of its ad revenue from mobile ($1.37 billion of its $2.59 billion revenue) in Q4 of 2013. This surge in mobile ad revenue falls in line with Facebook’s growing mobile user base, which hit 945 million monthly active users in Q4.

Facebook’s mobile app install ads and mobile app reengagement ads have also contributed to increased earnings, allowing advertisers to reach users within mobile apps or driving them back to mobile apps they haven’t opened in awhile.

Key Takeaway: Facebook has often been accused of being late to the mobile game, but they appear to be making up for lost time and seeing a big returns for their efforts. The same goes for small businesses: If you haven’t already invested in a mobile presence for your business, now’s the time to do so!

A new report from The NPD Group released this week showed strong year-over-year growth for the fast-casual restaurant market sector in 2013, with an 8% increase in customer visits over a 12 month period.

The data suggests that growth was fueled in great part by franchise expansions.

Key Takeaway: Diners are more and more frequently spending their dollars at fast-casual and fine dining establishments. For small businesses in these market segments, now is the time to capitalize on increased consumer interest by making sure your business information is easy for local searchers to find across the web.

Here’s a highlight of some of the top local-business-related news of the week.

This week, Ad-ology released a new report indicating that 25% of small businesses already active on social media plan to spend more of their marketing budgets on social advertising in 2014.

The majority (80%) of socially-active SMBs also plan to spend the same or more on social marketing this year.

The same report also showed that 31% of SMBs don’t have a dedicated website for their business, and that only 30% who do have optimized their site for mobile viewers.

Key Takeaway: It’s no surprise that small businesses are investing in social. With several new social ad formats rolling out last year, there are more options than ever for social advertising, and campaigns are flexible for a wide range of marketing budgets. As social ads become more sophisticated, the ROI for SMBs is improving as well. Are you planning to invest in social advertising this year?

Last week, Facebook officially launched a redesigned Trending section on its web-based homepage for US users. The updated design shows a personalized list of trending keywords and a brief explanation of the news associated with them.

Clicking on links in this section will take users to a customized page with mentions by Friends, Pages, and public Posts.

Key Takeaway: This updated Trending feature falls in line with Facebook’s recent focus on highlighting high-quality news stories. If you’re posting about a trending topic on your business’s Facebook Page, you’ll have the chance to be included in the results page for that topic and gain more exposure for your business. This is just one more reason to be actively posting valuable, relevant content on Facebook.

A new study by the Kauffman Foundation indicates that starting a new business may be easier in 2014 than it has in the past few years:

Key Takeaway: The economy has been tough on businesses of all sizes the past few years, but the climate is looking up in 2014, for both entrepreneurs who are looking to start a new business and current small business owners.

On Tuesday, Twitter announced a new feature called Custom Timelines. This feature allows users to organize and display tweets around a specific topic or theme.

Custom Timelines function much the same way as Pinterest boards do. Each timeline has a name, description, and public URL that can be shared and viewed by anyone. Users add relevant and interesting Tweets to their Custom Timelines, which other people can follow.

Currently, Custom Timelines is a feature only available through TweetDeck.

TripAdvisor announced the results of their annual Thanksgiving survey earlier this week. The results indicated an uptick in both holiday travel and spending:

Key Takeaway: This Thanksgiving will be a busy time for retailers, restaurants, and hotels. In the next couple of weeks, take time to prepare for the increased patronage by training seasonal staff, extending store hours, increasing inventory—whatever your business needs to do in order to get the most out of the holiday season.

This week, ADP released its October National Franchise Report, which outlines key job growth in the franchise sector each month. Some highlights from the latest report include:

Key Takeaway: The franchise sector has continued to grow faster than the overall economy in 2013. If you own a franchise and are going on a hiring spree, take the time needed to invest wisely in great staff who will be committed to your business and your customers.